Vermont’s oldest geocache was closer to our campground near Albany, New York than our campground near Montpelier, Vermont so we treated it separately from other Vermont geocaches. Besides, it was harder to find than any other cache we’ve found so it gets special attention.

The cache was hidden in October 2000 and is near Manchester, Vermont in the Green Mountain National Forest along the Prospect Rock Trail. There is parking for only three cars near the trailhead and we lucked out: Someone was leaving just as we thought we’d have to park further away in a spot of questionable legality.

The hike to the coordinates given for the geocache took us up a dirt road for about three-quarters of a mile, part of the time walking beside a lovely burbling brook. In compliance with the cache owner’s instructions, we left the trail at an easily-identified point and made our way to an overlook.

From the boulder, our instructions were to take a heading and walk 120 steps. We walked from that boulder and back over and over again trying to figure out just how long a step might be. We referred to posts by successful cachers, sometimes trying to match pictures with trees in the forest. That didn’t work. We were about to give up but we found a post with a new clue. Half an hour later, after three hours of looking, we had the cache in hand. Apparently the cache owner has llloonngg steps. 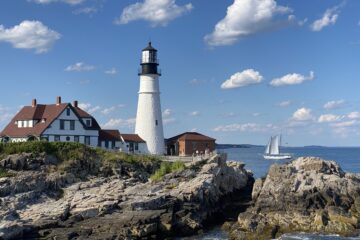 July 29, 2022 Maine’s oldest geocache is in Fort Williams Park near Portland. The walk wasn’t long or hard but the coordinates were about 25 feet off and the area was protected (?) by lots Read more…