We left Vancouver and crossed back into the continental US two and a half months after departing Helena, Montana. The border crossing was uneventful and the drive to Seattle relatively short compared to the six thousand seven hundred miles we had traveled in the RV since leaving the US (and that doesn’t include travel in the Jeep).

Jane’s cousin Donna lives in Tacoma so we met up with Donna and her husband Marty for lunch and a train ride a few days later on the Mt. Ranier Railroad.

Seattle is Washington State’s largest city. It is located on Puget Sound and is home to a large tech industry (Microsoft and Amazon are two companies headquartered there) and a 1962 World’s Fair legacy, the futuristic Space Needle. The attraction that Dave most wanted to see was Geocaching Headquarters in the Fremont neighborhood. We were cordially greeted and invited to explore the exhibits, given a trackable Headquarters Geocoin, and encouraged to take pictures. We left that we had collected on our travels and completed a of the surrounding neighborhood. Lots of fun!

Olympia became the capital city of the Washington Territory in 1853, and the city’s founder Edmund Sylvester donated 12 acres of land to the legislature for the building of a . Construction began but poor economic conditions halted construction with only the foundation completed. The legislature met in a variety of buildings and locations until planning, funding, and construction of a new was completed in 1928, 75 years later. The capitol has a campus of buildings including the legislative building for legislative and executive offices, the Temple of Justice for the Washington Supreme Court, buildings for several state agencies, and the Governor’s Mansion. Doric and Corinthian columns decorate the interior and exterior and the lamps and decorative fixtures were designed and built by Louis Comfort Tiffany. The 10,000-pound chandelier above the rotunda is 25 feet tall and could fit a Volkswagen in it. The State Seal featured throughout the building and on the state flag was designed by an Olympia jeweler by making two circles and putting a U.S. two-cent stamp of George Washington in the middle.

I love the blog and all of the great pictures and history. You and Dave are looking great. I miss seeing you two. Jane someday please show me how to do a blog, although it looks like a lot of work. I sure miss you two.

Thank you, Susan. We very much appreciate your comments. The blog host we use makes it pretty simple to do an entry. Organizing what we’re going to post takes us a while–sorting pictures, figuring out what we did when, and identifying subject matter in the pictures. We miss you, too. Maybe we can meet up on the road before too long? 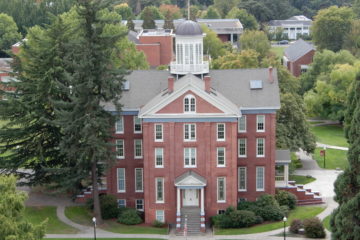 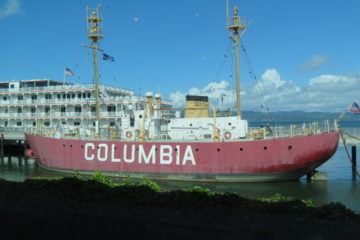 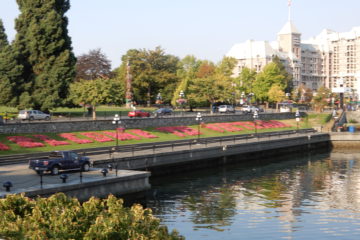